This one is more of in reaction to my family members, all Roman Catholic, who constantly talk about how they don’t like Christians and would never go to a Christian church… because they are Catholic.

Part 1: We Are Christian!

So these two are examples of terms that are relatively inconsequential, but it does demonstrate the clear distinction between different people who interact with the Christian religion in one way or another. It gets more important when you start to label people in other branches or denominations, sometimes even people in your own congregation that you think don’t live up to the mark. So to avoid unnecessary condemnation of people that may not look like us, while still holding to a high standard of righteous holiness, let’s go through a few of those terms.

The most basic distinction you have to make, in this case, is between a Christian and everyone else. To start of, those who have no relationship to the Christian religion, who never did, do not and do not intend to have one are, quite straightforwardly, called Non-Christian. We could call them Antichrist, but that’s a little harsh for our modern day language.

So how does one become a Christian? That one is slightly less straightforward, but not impossible to define. Christianity is an orthodoxical universalising religion, meaning that you do not need to be from a specific ethnic group or have specific practices to be a practitioner of the religion, you just need to have the right beliefs. So, basically, you need a formal declaration of faith.

So the next logical question is: Faith in what or who? That’s where it gets more complicated. While the simplistic answer would be “Faith in JESUS”, but that is, in practice, a lot more difficult to define. There have been many views, throughout History, on who Jesus was/is. Some say a great teacher, some say a prophet, some we say he is God. However, you might notice that the those views overlap; for example: the greatest teacher can only be God, and God can be primarily a teacher. So in all their wisdom, the sages of old have decided that the declaration of faith we proclaim should not be in abstract words, but in action. Some denominations will have this be practical, for example, the Quakers, so that to be Christian is to live like a Christian (whatever that means), but most have this be dramatic; yes, I’m talking about Baptism.

I’m not going to go into what Baptism is, but I.E. sufficed to say, that it is a dramatic expression that encapsulates the most fundamental Christian beliefs. To me, these fundamental beliefs, which we call the Gospel are the the doctrines of Original/Ancestral Sin and Atonement. The first is the belief that mankind is somehow wired to want to Sin on our own, which quite simply just means ‘actions that eventually make things die’; the second is that we have to exchange our human sin for the human Righteousness of God, in order to achieve Life. Therefore, the ultimate aim of the Christian life is ‘Sacrifice’, and to sacrifice in the right way; so that whatever all of that means, is encapsulated in Baptism.

Part 2: Are You Really Christian? 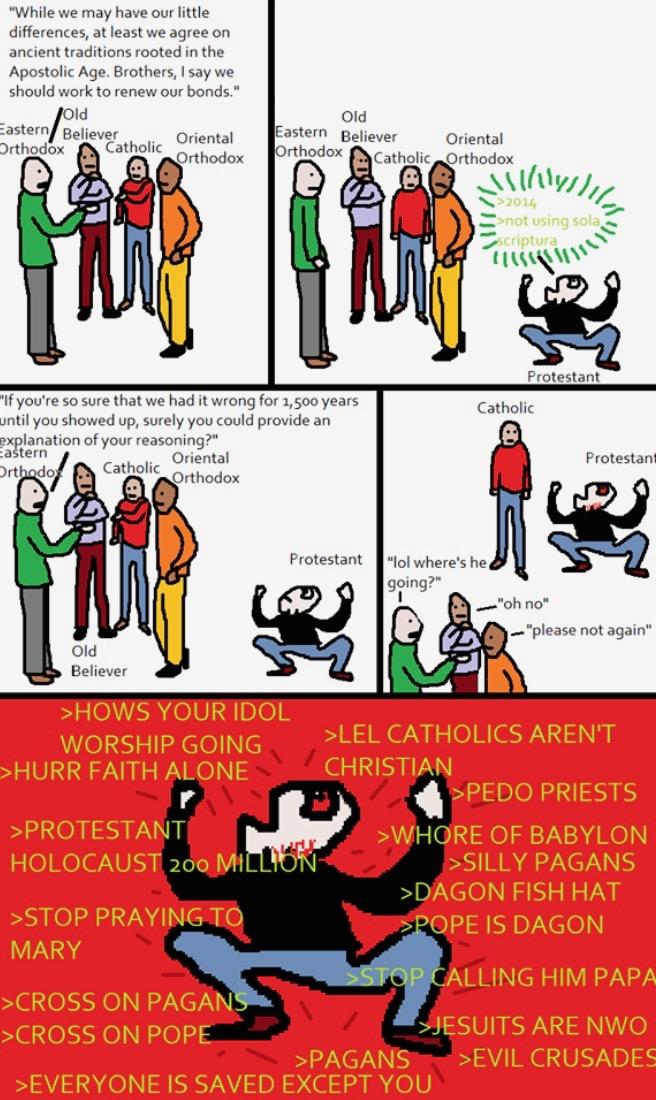 I’m Protestant, I swear, but this picture really caught my eye and probably explais why my family is really really anti-Protestant. Lol.

Okay, so this is the main course of this article. We are going to have to first go through what Christian Orthodoxy is; and I don’t mean the Eastern Orthodox or Oriental Orthodox Churches, though that is part of it. A long long time ago, in a continent far far away (cos I live in Singapore, deal with it), the early Christian community wrote up a list of what they believe, in Latin, Credo, in English, The Creed; specifically, the Niceno-Constantinoplean Creed. Let’s have a look:

I believe in one God,
the Father almighty,
maker of heaven and earth,
of all things visible and invisible.

I believe in one Lord Jesus Christ,
the Only Begotten Son of God,
born of the Father before all ages.
God from God, Light from Light,
true God from true God,
begotten, not made, consubstantial with the Father;
through him all things were made.
For us men and for our salvation
he came down from heaven,
and by the Holy Spirit was incarnate of the Virgin Mary,
and became man.
For our sake he was crucified under Pontius Pilate,
he suffered death and was buried,
and rose again on the third day
in accordance with the Scriptures.
He ascended into heaven
and is seated at the right hand of the Father.
He will come again in glory
to judge the living and the dead
and his kingdom will have no end.

I believe in one, holy, catholic and apostolic Church.
I confess one Baptism for the forgiveness of sins
and I look forward to the resurrection of the dead
and the life of the world to come.
Amen.

This is the standard of Christian Orthodoxy, and all of the four main branches of Christianity adhere to it: Roman Catholicism (*including ‘Nestorianism‘), Protestantism, Eastern Orthodoxy and Oriental Orthodoxy; with the exception of the Oneness Pentecostals, but I will get to that later. All Christians who do not adhere to the Creed, with the same exception, are called Heretics, at least by the main branches of Christianity, others might prefer the term Heterodox Christians, because just like the word ‘Antichrist’, ‘Heretic’ comes off a little too harsh; though it is still the technically common term used by Christian scholars of religion. These include Nontrinitarian Christians such as the Mormons, Jehovah’s Witness and Unitarians, as well as Esoteric Christians, such as the Gnostic Church. We tend to throw around the term ‘Heretic’ a bit too much, and that would confusingly label other Orthodox Christians with these groups. Just no.

(Okay, so quick explanation on Oneness Pentecostals. You might have heard the term ‘Nicene Creed’ used for the Creed I pasted up there, but I called it the ‘Niceno-Constantinoplean Creed’, because the original Nicene Creed is not the one that I have there. Long story short, after the Council of Nicea, the Bishops at the Council of Constantinople decided to 加盐加醋 edit it to more clearly reflect the doctrine of the Trinity. The Oneness Pentecostals are the only denomination of Protestants that do not stand with the doctrine of the Trinity, holding to the original Nicene Creed instead. They still believe in the Father, Son and Holy Spirit, but believe that they are different modes of the one God named Jesus. However, they also hold to the doctrine of Sola Scriptura, which makes them fully Protestant. So to be very exact, to most other Protestants, they are heretics but not schismatics. I’ll explain what that word means in the next Part.)

Part 3: Alright What Kind of Christian Are You? 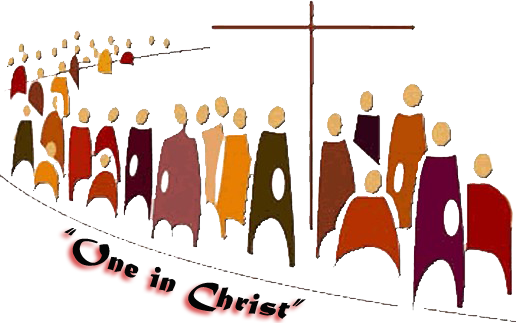 Alright, then how about other Orthodox Christians from different branches. For example, as a Protestant, how do I think of my Roman Catholic family members, and how should my Roman Catholic family members think of me? Well, believe it or not, there is a word for that too, Schismatic. While all Orthodox Christians draw doctrine from Tradition, Scripture and Reason (or Magisterium), we disagree on which of these is the rule of faith to measure our doctrine.

Essentially, this is a matter of Formal Principle, the same kind that you would already be familiar with in everyday life; these are the rules you use to decide what to do and how to think. Very briefly, to use a very Singapore army analogy: Tradition is what we call the ‘By Left Method’ or ‘Unofficial SOP’, no one knows how to describe it, everyone knows what it is and, all in all, it just works… most of the time; Scripture is like our ‘Record Books’ and ‘Logs’, that are relevant incidents and occurrences, codified in writing, that everyone has access to… but not everyone can fully understand; Reason, of which the highest form is the Magisterium, is our ‘SOP’ and ‘Routine Orders’, it’s decisive, straightforward and no-nonsense… unless your leaders happen to be really bad. So, as you can see, each has its perks and, quite reasonably, different Christian communities might pick either one of those as their primary rule of faith, which then forms their basis for Christian Unity. You can even see this concept of unity in the word ‘schismatic’ itself.

My point is to be careful of how you label other Orthodox Christians from different branches. They are not Apostate, because they still hold faith in Christ and his Atoning Cross and they are not Heretical, because they believe in the same Creed that you do, and all long for ‘One holy catholic and apostolic Church’ to manifest itself in its full potential. To narrow it down to Schism on the basis of Formal Principle, allows us to actually deal with the problem. Like I said, we all want the worldwide and eternal Church to manifest its oneness, that is to say unity, its holiness, that is to say its unique identity, and its catholic nature, that is to say obvious universality, relevant to all mankind; and that starts with every single one of us dealing with the fact that Formal Principle has been the root source of disunity on an institutional level.

To me, the solution is to be both together but separate; we should emphasise our common Christian and Orthodox identity, but also not interfere with each of our approaches to Christian Unity. To me, if the Roman Catholics are right, then the Pope, who holds the office of the Holy See, will succeed in bringing the Church together, if the Protestants are right, then Scripture will succeed at that instead, same for the Eastern Orthodox and Oriental Orthodox. Either way, it was Our Lord who himself said, “…that they may all be one. As you, Father, are in me and I am in you, may they also be in us, so that the world may believe that you have sent me.” (John 17:21); a command that the Church, in every branch, has struggled to obey by doubling down on their chosen Formal Principle. We need to get back to that focus on unity, on every level, from family, to friends, to the Christian community at large. We need to respect the validity of other Christians’ conventions and hold fast to our own, all for the purposes of unity. Can we please try to do that? I’m sick and tired… and heartbroken over the sheer nastiness of Christian behaviour towards — EACH OTHER. How do we bring the Gospel to a dying world if we kill each other with words, heck, sometimes with sticks and stones.

I’m not looking for a fluffy, liberal, tolerating blindness that looks pasts differences to “focus on love”, as if ignoring someone’s core identity and beliefs is loving in any way. No! I’m looking for respect and validation, a sustainable way to harmony in the Christian community. How else can we love? 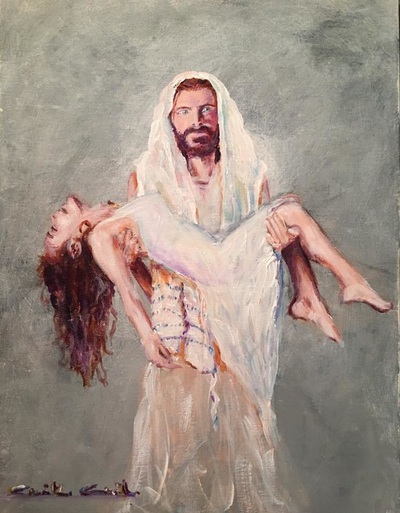 We live in a broken world, why break ourselves before it can even get to us?